Manosong Montakan (1989, Bangkok) is a talented Thai architect based in Barcelona. She holds a master degree in Advanced Architecture from Institute for Advanced Architecture of Catalonia, Barcelona, and previously she graduated from School of Architecture and Design (SoA+D) KMUTT (2008-2012). Manosong already received several awards and her works have been published in magazine such as Architecture & Culture Magazine, Green Building & Sustainable Strategies magazine, among others. In 2013 together with Achawin Laohavichairat, she started the multidisciplinary design and research studio MXA in Bangkok. Below you will find one of her latest project and a gallery of her beautiful architectural sketches.

Together with Irene Ayala Castro, Ya Chieh Chang and Zina Alkani, Manosong designed “WATER-DRIVEN BREATHING SKIN”, a semi-passive material system for outdoor spaces in hot climates where public space is less welcomed due to the summer heat. 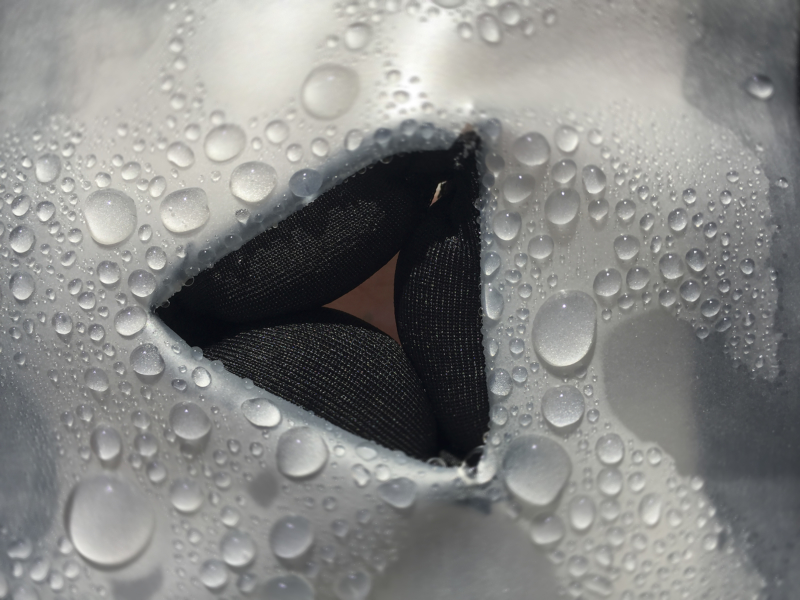 “The research part was initiated by understanding breathing behavior of organisms and further progressed into the artificial creations sprawned from such behavior across various fields.  The questions whether a smart material system can function as simply as organic activities, lead us into the exploration of a series of materials…” The team was intrigued by the resulting mechanism of open/close behavior that enables air exchange and the regulation of body temperature that resembles the ventilation to achieve comfort in an enclosed area.

“Sodium Polyacrylate, one of the super-absorbent polymers in the hydromorph family, is the major material for the skin system in the wake of the preliminary study for its high capacity of volume change when absorbing water up to 300 times its volume in a short time span, and the effect of evaporative cooling as it prolongs the evaporation process…” The study concluded with the encapsulation of sodium polyacrylate with elastic fabrics, followed by a library of experiments in shapes, patterns and size in an attempt to optimize open/close mechanism to allow passive ventilation and cooling in hot and dry summer climates.

“The material system is operating on the basis cycle where sodium polyacrylate starts from dry state, swollen state by absorbing water, evaporation state that performs cooling and gradually moves towards dry state, repeating the cycle. To increase the responsiveness, three different approaches of water supply for the cell were tested. Among all, the water channeling is tested to be three times faster in swelling cells than soaking or spraying. Therefore, channeling is the optimal means for water supply. Taking into account the lack of water in targeted climates, the system design contemplated on the supply of water. Fog, dew collection is adopted as an established local intelligence and is a natural cyclical system requiring no further consumption, and is 15 times more water-efficient than the one of a misting system, commonly used.

The performative prototype is fabricated with two hydrophobic membrane layers in different opacities regarding the solar radiation conditions of the site, holding the breathing cells connected to a 3d printed and tubing channeling system. The water is delivered by gravity from a principal channel. The cost of production of the breathing skin system is around 9euro per sqm, including the pvc membrane, sodium polyacrylate, elastic fabric and the complete channeling system.”

With the material system, ventilation and evaporative cooling are made possible semi-passively in a tensile structured form where the breathing skin is able to regulate the relation between our body and its surrounding and could take in multiple uses and forms.

As aforementioned, below you will find a selection of beautiful architectural sketches from Manosong!

Visit her ISSUU for more projects!