Matteo is an Italian product designer, based in London. Currently attending the MA Design Products at the Royal College of Art, his practice focuses on the interactions between human and things. “Designing objects with some extent of emotional behaviour is the core of my interest, and a space I aim to discover more. Fun and surprise are elements I try to include in my process, with the intention of creating meaningful experiences.”

Sidekicks is Matteo’s graduation project, a collection of objects that aim to help us reduce the amount of phone usage. Rather than creating a new device or establishing a new behaviour to keep us away from the phone, Matteo re-designed existing objects with a particular feature: none of them has on/off buttons; instead, they can only function whenever we physically leave our phone to them. A simple yet clever solution that can help us to redefine the time we spent looking at our smartphone screens. The project includes a desk lamp for working, a speaker for leisure time, an alarm clock for the end of the day and a projector for watching a movie with someone. 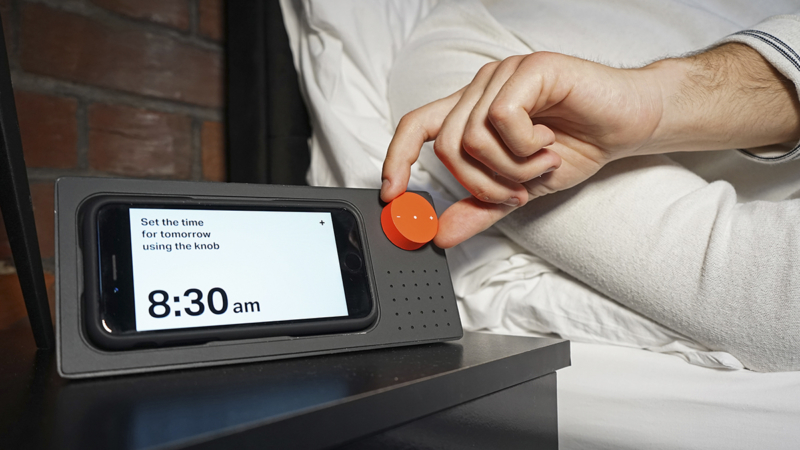 ​  The system combines the four objects with an app, which has no function until the moment our device is plugged into the objects. Such action activates both the objects and the app, which will show us our phone screen-time amount until that moment. If such time meets the threshold we set for ourselves through the app, each object will “reward” our self-control with a special function. Whenever we haven’t met our goals, instead, the objects will function in a standard way. The reward functions are the “critical design” part of the work: the projector will print a customised and tangible memory of the experience of watching a movie with someone; the desk lamp will suggest us to take a break from working with some colourful and cheerful light animations; the alarm clock will project (with a laser) a texture on the ceiling to help us set the ideal breathing rhythm for sleeping; eventually, the speaker will unlock a detachable part of itself, allowing us to carry both the music and the controls around our house, if we are doing more activities at the same time.

The objects were tested in their early-prototyping phase: Matteo run a workshop with 8 participants from different backgrounds. The feedbacks were very positive, and as one of the participants stated, “even if we think we have self-control, it is actually not true (see Instagram for example)! So, I see the benefit of the objects”. Sidekicks is a really interesting project in which the smartphone is not rejected but exploited as a key, as a tool to do something else. Matteo told us: “The project was a personal reflection on what can be an interactive object… It will surely affect my future work”. Asking him about an industrial production of Sidekicks, he told us: “Basically, I can not give you any information yet because it is still a work in progress; at the moment the objects production is far, but it is definitely an interesting evolution of my research, of how these kind of objects can be part of the current market system dynamics!”

All Rights reserved to Matteo Bandi