The Legal Status of Ice is a project by Irene Stracuzzi, developed as a master thesis (2017) for the Information Design department at Design Academy Eindhoven. The installation visualises the race to the Arctic: this territory is currently the centre of a contentious territorial dispute, the five Arctic nations – Russia, Canada, Denmark, Norway and the United States – all make their claims, sometimes as literally as planting a titanium flag at the bottom of the Ocean (as Russia did on the 2nd of August, 2007). The stakes are considered high: disappearing sea ice might uncover immense oil and gas riches for whoever marks the Arctic map first. But isn’t it in fact the ice, that has been declining by a shocking 50% since the late 1970s, which should be the urgent issue here?

The project is a huge 3D model, that explores the overlapping border claims by means of a projection. It compares these with geographic data of fluctuations in sea ice, oil and gas reserves, navigational routes and the geological formations of the seabed. As the Arctic nations are trying to acquire more data to substantiate their claims, the model shows what is already known, revealing the importance of holding valuable geographic and geologic information. Overall, the project aims to demonstrate the cartographic colonialism behind the dispute and questions the notion of sovereignty in a region which should be perceived as a global commons. 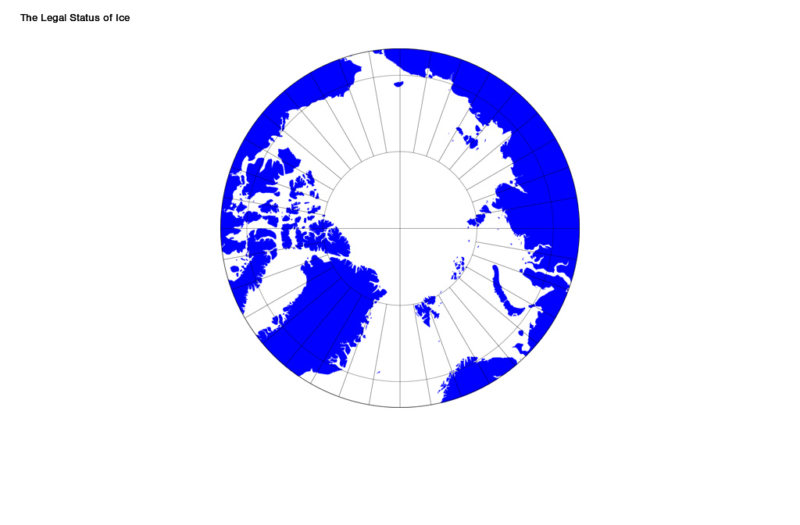 Geographically, the Arctic is a space demarcated by a line on a map, a circle of latitude in the Northern hemisphere, 66 degrees north of the Equator. But an Arctic border can also be defined according to climate and temperature, geological features, water and ice properties, or according to the soft laws and agreements that specify obligations and rights for the region. Even the myths of early 20th century explorers provide frameworks for an understanding of the Arctic as the last frontier, a cold Wild West at the edge of human civilization. Still, many borders need to be fixed on the Arctic map. How will they be defined and what will be the consequences of this virtual reorganization of space?

For the countries that border the Arctic Ocean — Russia, Canada, Denmark, Norway and the United States — an ice-free ocean means new economic opportunities. The race to secure sovereignty opens up. Map in hand, new borders can be drawn everywhere.

All Rights reserved to Irene Stracuzzi