Giuseppe Arezzi (1993) is a young talented designer from Ragusa, Sicily, currently based in Milan. In 2016 he graduated with honors at Politecnico di Milano, Faculty of Design, MA in Interior Design, with the thesis “Beata Solitudo, The Contemporary Hermit’s Shelter”, in collaboration with the mentors Francesco Faccin and Francesca Balena Arista.  Currently besides developing independent projects, he is also assistant professor at the Politecnico di Milano under the professors Andrea Branzi, Michele De Lucchi and Francesca Balena Arista. He has collaborated several times with Studio Francesco Faccin.

In 2016, with the project “Protoplast” Giuseppe has been selected by the Triennale di Milano for the exhibition “New Craft”, for the “XXI Triennale” in the category “under-35 designers”. In 2017, He exhibited the project “Beata Solitudo”, inside “Una stanza tutta per sè” curated by Domitilla Dardi at “Cantiere Galli Design” in Rome. His own research is focused on anthropological topics and cultural traditions: the heart of his work. 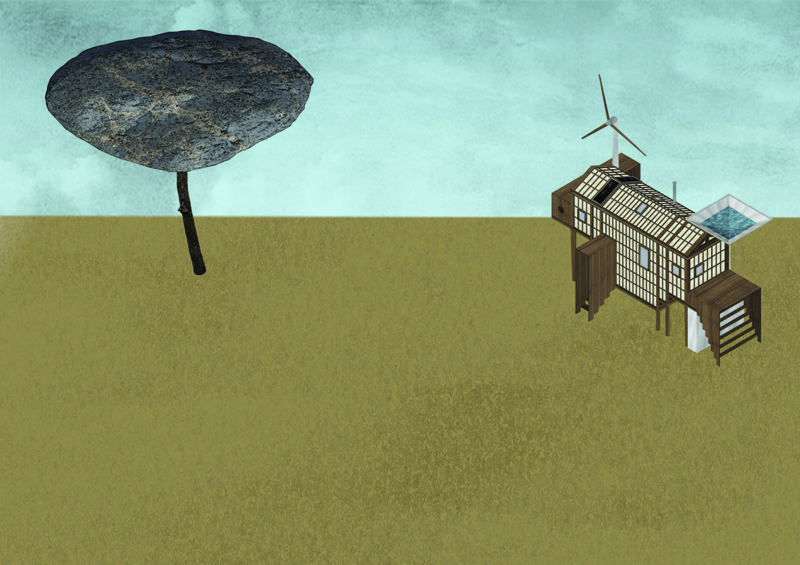 WeVux already introduced you Beata Solitudo (here), focusing on Cantiere Galli’s event and Giuseppe’s installations. Today we ask him few questions about his project and method:

Looking at your project and research, the first question is, what is your relation with the 21st century and its contemporary society?

The 21st century is certainly the one I am experiencing and it is certainly the century that has to worry about solving the problems caused by the previous centuries. The 21st is also a young century and therefore an adolescent who, like all the twenty-years-old, paws and wants to redeem himself. My relationship with this time and its society is analytical and contemplative, I like to observe what is happening and to raise issues that highlight contemporary problems with a critical and sometimes provocative approach. As a designer, I often ask myself who is the contemporary man, but also who is the contemporary designer and how can the latter play a decisive role in our society? Finally, I believe that the design world is moving in this direction: curated by Paola Antonelli, the XXII Triennale will surely be able to give answers to the themes that concern us more. No more furniture and design objects styling, but the bees extinction, bio-technologies, pollution, global warming, waste…

In the case of “Beata Solitudo”, I analyzed a very small portion of humanity. The condition of the contemporary man is mainly dictated by the economic aspects of society: he is not a man that works to accumulate and possess for the future, he lives in the present, in a condition of transiency that leads some individuals to seek refuge in intimacy with themselves and nature.

In your opinion, what is the link between nature design and future?

The relationship between nature and design has always existed: the necessity for men to find a shelter, to build useful tools for everyday life, these acts have always been at the base of civilization. I found these aspects in the definition of “Vernacular Architecture” by the historian and architect Bernard Rudofsky; he describes those architectural-building forms that belong to the most ancient traditions of man: the tents of the nomads, the Celtic tombs, the arcades as an urban device… They are not conceived by any particular designer or author. This architecture can also be defined as “anonymous”, “rural”, “native”, “indigenous”, “spontaneous”, “traditional”. Vernacular architecture does not follow fashion cycles, it’s almost immutable, not perfectible, because it’s designed to fully solve a function. These architectures are relatively simple, handmade constructions, often assembled in weeks and months of patient manual labor. Time and elementary technology generated a raw beauty, sometimes archaic and sometimes vaguely surreal, very far from nowadays technological and posh paradigm. This is what the past has left us, in the future I don’t know what will be the relationship between nature and design, maybe it would be nice to ask a fortune teller… I’ll continue to question myself!

In my project, I have brought back to life some vernacular architecture techniques, and, since the project is adaptable and usable anywhere in the world, I hypothesized that according to the place where the architecture is installed, it can be mixed in the context: if it’s placed in the desert it would become a house of carpets, referring to the Bedouin tents, in Thailand a house of palm leaves and so on…

What is the starting point of “Beata Solitudo”, the moment that your research led you to start developing this project?

The insight came when I saw a photo of the famous writer Tiziano Terzani, while he was using his laptop during the last days of his life, in the house of Orsigna, a small town surrounded by nature in the province of Pistoia. Tiziano Terzani was a hermit, but at the same time he was using a laptop – I don’t know if he was connected with the world, but he had one – so I realized that the figure of the hermit was not only present in the past and in religions, but it’s a true and contemporary character. From here I continued to research and I came across a photographic project by Carlo Bevilacqua entitled “Into the Silence”. With this series I discovered that in Italy and in the world there are many people who decided to undertake a solitary life. These characters are men or women that come from different areas of work, with a strong component of knowledge and know-how: TV directors, teachers, former carpenters, former rockers, naturists, artists, former cruise captains, land artists, engineers, former police officers, former models and writers… All the aforementioned cases live in very different places and environments, from the American deserts to the Sicilian islands, from the Australian valleys to the French countryside… At this point I told myself: the contemporary hermit may be a hypothetical client for a hypothetical designer of the future, like every client has characteristics, needs, lifestyles. The contemporary hermit is a person (with no specific age) who has had a wide and complex education, he/she comes from a profession that requires patience and experience and wants to live immersed in the beauty. He/She is a figure looking for individualism to reflect, meditate and free himself/herself from the rest of the world.

Your project is a wood and fabric architecture, why did you use these materials?

As the “stable” man becomes “precarious”, even the idea behind the construction materials can change from “eternal” (e.g. brick) to “ephemeral” (e.g. fabric). I referred to the “Theory of Clothing”, 1860, by the German architect Gottfried Semper. In Semper’s vision, architecture has origins in textiles and weaving, like nomads tents. There are two needs that have given start to the use of textiles in architecture: on one hand to have flexibility and a strong material, on the other hand to cover, protect and close. He thinks that constructions and walls work only as a support for the fixing of carpets and fabrics. I also referred to the Japanese building culture where the houses are built entirely of wood and have a relatively short life cycle: they born together with the family to last until the death of that family. I found this concept extremely contemporary, a house must be temporary, we can no longer pretend to build in an intrusive way, our cities are already full of abandoned concrete buildings, dilapidated and unused.

Why the 21st century hermit is a technological, mutant and primitive man?

The search for a hermitic life can even be limited to a short period of time. In many cases the hermit is a mutant person because he can adapt to different contexts and different lifestyles. He/She is a human being respectful of nature that seeks contact with it, almost a return to primitive behaviors: he supports himself in self-sufficient ways, breeding animals, cultivating fruits and vegetables and doing manual labor. He has a sustainable sensitivity and uses technology in perfect symbiosis with natural resources. He is the hermit of the 21st century because he uses the laptop. He doesn’t have well-defined goals, but he’s looking for natural and desolate environments where to live with himself and maybe some animals: glaciers, tropical forests, arid deserts, forests and countrysides.

What kind of space does this figure need?

I don’t know exactly what kind of space can be perfect for the contemporary hermit, but I tried to find it with my design vision, that certainly should not be considered correct because it is just a vision. I designed a small house with everything necessary to live alone: ​​a space for cooking, a space for eating, a space for washing, a space for sleeping and an attic to stow food and watch the stars. There are also spaces to breed animals and appliances to use renewable energy.
This shelter was designed as a product rather than a definitive architecture; the solid and self-supporting structure allows to place the dwelling anywhere in the world. From time to time, the wooden walls, conceived as frames, allow to weave an different kind of textile, depending on the place where the passenger compartment is mounted: in Mongolia or in the desert it would become a house of carpets, in Thailand or in equatorial countries a palm house, in Antarctic of sealskin… Beata Solitudo is not only a physical space, but a representation of the lifestyle of the mutant and primitive technological hermit.

In your opinion, can Beata Solitudo be considered as a way to get out of society? A critique to the condition in which we live?

It may seem trivial, but Beata Solitudo is a reflection and a reading of the present, of a society increasingly in the grip of frenzy and ambition. Frenzy and ambition are also part of my life, it’s impossible to deny it, but then at a certain point, everyone thinks to give up everything and go to live in permanent isolation. I believe that the project is a criticism of this sentence that we are constantly repeating: I give up everything to get away and live somewhere else.
Would we really manage to live in solitude?
Would we really be able to live alone in a desert or a desolate valley?
Would we really manage not to have contact with the rest of the world for more than a day?
Some people in the world do it without any problem, would you do it? I do not know yet…

You will be able to meet Giuseppe during Fuorisalone 2018 at: 5vie Art+Design District, where he will present a project made in collaboration with a Sicilian company from Grammichele, specialized in wood working and at Subalterno1 Gallery, Lambrate District, for the collective exhibition “Send me the future”. Giuseppe is also one of the designer invited to participate to 100×100 Achille with a special gift for Achille Castiglioni’s 100th anniversary, the exhibition will be on until the 30th of April at Fondazione Achille Castiglioni, Milan.

All Rights Reserved to Giuseppe Arezzi